Once again this year, Biocat has headed up or participated in projects funded by the European Union that have channeled European resources towards Biocat’s priority lines of action, including technology transfer, training and entrepreneurship, and internationalization to benefit companies and organizations in the BioRegion of Catalonia.

bioXclusters+ , a commitment to internationalization

In 2015, the bioXclusters+ internationalization project was approved as the continuation of the “bioXclusters” alliance, which Biocat participated in from 2012 to 2014. The new program, with support from the European Union, will cover 2016 and 2017, aiming to become the most competitive meta-cluster in Europe and be able to address health-related challenges and help SMEs in the sector grow, with special emphasis on personalized medicine as a tool to tackle the future of global health in the coming years.

Some of the main areas of action this new project will work on include improving international positioning, strengthening ties with familiar markets (USA, China and Brazil), opening new markets (Japan, Australia and more), providing customized tools to promote companies’ internationalization, and identifying areas of possible technology exchange and collaboration with other bioregions. BioXclusters+ is promoted jointly by the main health clusters in Europe: Biocat (Catalonia), BioM (Bavaria), bioPmed (Piedmont) and Lyonbiopole (Auvergne-Rhône-Alpes).

2015 also saw the launch of the first phase of ENTrepreneurship in BIOtechnology (ENTBIO), a project led by Biocat that focuses on creating and growing biotechnology companies by promoting entrepreneurship in higher education. Its main aim is to generate value for society in INTERREG SUDOE and neighboring regions. The program has funding for 2016 and 2017.

ENTBIO is the third in a trilogy of projects, following the INTERBIO and TRANSBIO initiatives that brought together research centers, technology platforms, universities and companies from France, Portugal and eight regions of Spain, including Biocat and the BioRegion, to form an interdisciplinary network to more efficiently turn biotechnology research results into economic realities.

In 2015, Biocat headed up the team preparing a bid to participate in the European Interreg north-west Europe project Boost4Health. This transnational support program aims to help SMEs from northwestern Europe to grow internationally by launching innovations from the life sciences on the European market.  This alliance is made up of 11 leading organizations in the life sciences sector, including Biocat, and will begin working in 2016. It is expected to help 300 SMEs with their internationalization process by providing financial support.

Biocat has also worked on participating in the Onconet SUDOE project, an Interreg project that aims to establish a permanent network of excellence in oncology by mobilizing healthcare stakeholders in the SUDOE region around prevention, diagnosis, care and translational research. This project aims to promote research, technological development and innovation. 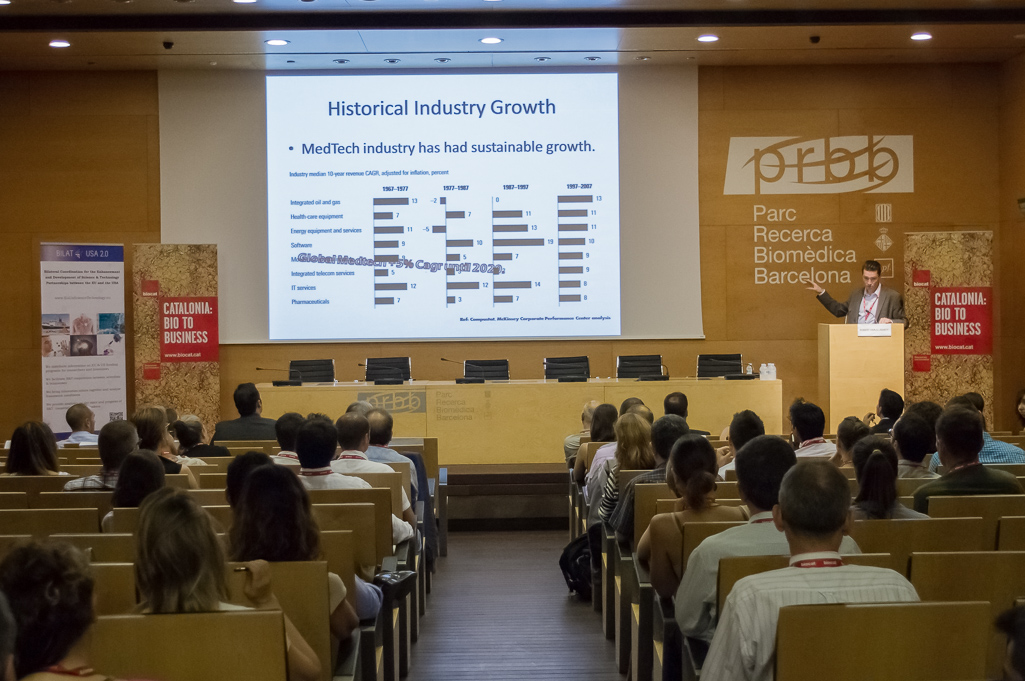 Innovating in medtech was part of the European BILAT 2.0 project

BILAT 2.0, cooperation between Europe and the United States

In 2015, Biocat participated in and promoted several events under the BILAT 2.0 program, under the European Union 7th Framework Program to promote cooperation in research and innovation among stakeholders in Europe and the US and encourage policies and strategies that foster bilateral collaboration.

In January, Biocat participated in the policy workshop at the EU-US Innovation Conference, which aimed to highlight the best practices in the member states and promote the integration of innovation in EU-US relations through the most innovative and entrepreneurship-based principles.

In July, Biocat organized, in collaboration with BILAT 2.0 USA, an event entitled ‘Innovating in medtech. Experiences and collaborations from EU and USA’, which brought together one hundred people to identify key aspects of regulatory issues, reimbursement and market access when introducing a new medical technology device. The event focused especially on the regulatory differences between the EU and the US.

Finally, under this framework, the B-Debate session entitled ‘Brain Health: From Genes to Behavior. Improving our life’ was held in October with international experts analyzing the factors involved in brain heath.